How do you bootstrap your company for 10 years, get the respect of your category, and cement ‘an expert’ positioning among your target customers?

Well, in this article I’m going to dive into 6 things I learnt about ProfitWell’s journey; all from snooping on their website and combining that with insight from being a consumer of their content for 3 years.

Here’s what I noticed…

ProfitWell has picked a clear enemy and yes, this is nothing new.

For instance, Wise (formerly TransferWise) picked banks and their ridiculously high cross-border money transfer fees as the enemy, and this positioning helped them grow like a pirate’s beard. It’s also common to see SaaS companies going after a bigger competitor’s poorly designed product as the enemy.

What’s different here is ProfitWell picked a way of doing things/a process as the enemy: pricing SaaS products through guessing. Guessing is a popular way of pricing software and the target audience is big enough to make a worthwhile category…

ProfitWell positioned itself against guess-pricing and screamed–as shown in the screenshot above–ensure your pricing strategy is driven by data. That is what the customer is being sold, not a pricing software.

Also, worth noting is how ProfitWell paints itself as a guide helping travellers from the old world of guess-based pricing (the enemy) to data/science based pricing.

This movement of the customers’ beliefs from a comfortable status quo (e.g. I type my articles) to a new reality (gosh! dictating articles is more efficient), is the key to new demand.

What do you notice in the screenshot above?

ProfitWell directly appeals to their customer persona to stop suffering the pains of that enemy.

If you’re a company living with credit card failures, you’ve probably accepted it as your norm. ProfitWell then kicks in the door, pokes you with a crooked stick‌ and whispers, “you’re letting it happen (… but you can make it stop)”.

It may be easy to miss, but like Drake’s subliminal disses, that accusatory tone works wonders for educating people about a new business problem. And it’s softened by the fact that the first solution they propose is not product-based but a low-risk offer to ‘get an ROI analysis.’

What do you think they are doing in this screenshot?

Instead of singing about their product, ProfitWell chooses to hammer home ‌that they are the queens of pricing. Why?

By saying they study subscription pricing and growth more than anyone else in the world, they’re crowning themselves the experts.

And for many people, it’s easier to believe that than someone claiming they (in a husky, $999 course hawking, guru-like voice) ‘have the best pricing software’ which would automatically make you think of comparing them to competitors.

They even invented a phrase to do this. Can you spot it in the screenshot below 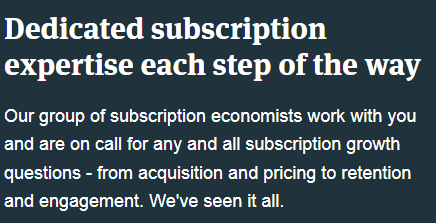 From the screenshot above, ProfitWell leads by shining a light on the impact of a problem subscription companies know exist but haven’t put their finger on.

They have developed a deep understanding of their customer and their failures: you’re ignoring the size of the payment failure problem. And because this persona has accepted them as an expert by now, they do not even need to quote where that 30% customer recovery rate stat came from.

Do I start a software business or a service business? Every entrepreneur’s dilemma. How about combining the two?

For context, ProfitWell started with a freemium product that provides subscription reporting and analytics to companies.

This was the foundation that allowed them to build complementary paid products, and publish unique insights that positioned them as the experts.

The screenshot below shows how they’re leveraging their free data product to sell a combination of software (ProfitWell Retain) and advisory services to help subscription software companies reduce churn. Software and a Service.

This software and a service model is popular in the indie hacker community where people  build service businesses on-top of/next to a popular third party software.

For example, the duo of Dan Norris and Alex McClafferty built WP Curve, a subscription-based website maintenance service for WordPress sites, and grew big enough (1,000 customers) to be acquired by Godaddy in 2016.

The screenshot below shows the reasons ‌GoDaddy gave for acquiring WP Curve and are the same benefits ProfitWell has inherently enjoyed by weaving a service offering into a SaaS product. It also helps cement their subscription expert positioning.

What do you think, will we see more Software and a Service models among established startups or not?

With all this, what I do not capture here is how ProfitWell has got its message, product and deliberate positioning in front of the right audience. If you snoop on them further, you’ll notice consistent content: videos, podcasts, newsletters and articles, all shaped around subscription pricing education.

I’m a freelance writer eating stories for breakfast and long conversations for lunch.

I have my nose in marketing, fintech, open banking, startups (majored in entrepreneurship in uni) and some other thing that hasn’t been invented yet.